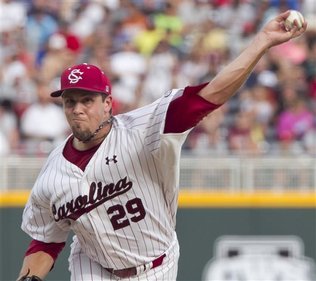 Before the 2010 College World Series, Michael Roth was a bit player for the South Carolina baseball team.  He was a situational lefty out of the Gamecock bullpen, and occasional pinch-hitter with batting practice power who rarely, if ever, delivered.

When Ray Tanner announced Roth would start against Clemson in the 2010 CWS I thought he had lost it.  I think maybe even Tanner thought Tanner had lost it.  He wanted three solid innings.  Then four.  Then five.  Then six.  When Roth continued into the seventh we knew something special was happening.  And we know how the 2010 story ended.

One year later Michael Roth is a Gamecock legend.  And I don’t use that word lightly.  What Roth has done from June 2010 to June 2011 is bona fide legendary.  From mid-inning bullpen specialist to All-American is simply not believable if we hadn’t seen it with our own eyes.

The reason I bring this up now is because of the territory Roth crossed into on Sunday night.  He gave up four runs (three of which came on a bases-loaded triple) but all the runs were unearned.  He has not given up an earned run since May 13.  And his ERA dropped below one to 0.97.

That is insane.  A good ERA…check that…a GREAT ERA for a starting pitcher in college baseball with 100-plus innings to his credit is 2.50.  Below two is nuts.  An ERA around 1.50 is reserved for closers who throw a lot fewer innings.

Ah, well, while we’re waiting for football season, how about let’s win another baseball title to pass the time.

3 thoughts on “Roth’s Run and Other Tusings”