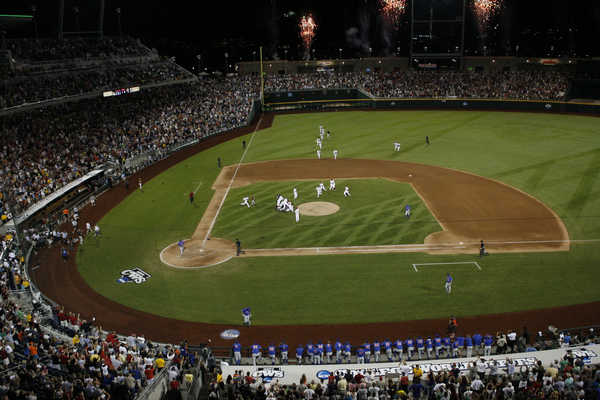 I stood in my living room last night and watched the final out of the 2011 College World Series.  When I saw Matt Price point to the sky and Jackie Bradley, Jr. draw a bead on the final out of the season, I clapped my hands a couple of times and gave a little fist pump.  After a hug for the wife I sat back down and watched the celebration on the field.

This was in stark contrast to last year when Scott Wingo scored the game-winner against UCLA and I went temporarily insane.

As I watched ESPN I noticed something – like at my house, the celebration seemed slightly subdued.  There was a dogpile, and plenty of hugs and high-fives to go around.  Ray Tanner was obviously emotional in his interview, but in a different way than last year.  I was trying to pin down why this was the case, then it hit me.

You know the old saying, “act like you’ve been there before”?

Well, we’ve been there before.

Don’t get me wrong, this year’s title isn’t any less satisfying or enjoyable.  Quite the contrary.  This run through the NCAA tournament was about as fun as any sporting event I’ve seen – full of storylines, drama and huge plays.  And as I tweeted last night, this team is as likable as any I’ve ever followed.

I think the thing is, for Carolina baseball, this is the new normal.  We have the best baseball program in the country, and I don’t think anyone can dispute that at the moment.  Making it to the CWS is no longer the goal.  Winning the whole darn thing is.

As Tbone wrote yesterday, there were simply too many storylines to try to write a blog post.  But I’m going to give it a try, in Tusings-style.   My random thoughts over the last couple of days include:

Now to go order my t-shirt.

4 thoughts on “The New Normal”