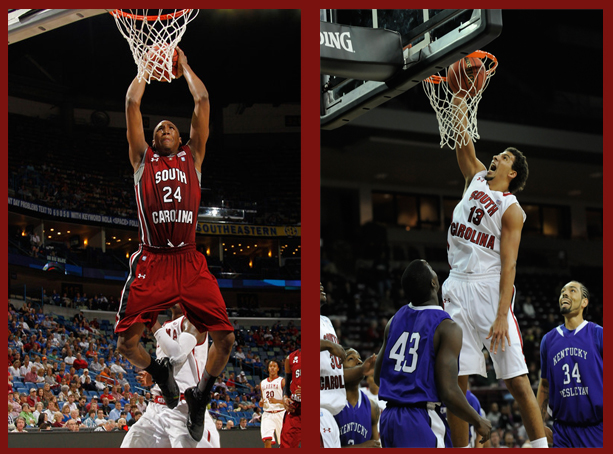 Conflicting reports surfaced yesterday about USC basketball players Damontre Harris and Anthony Gill requesting releases from their scholarships.  We think (operative word here is think) it was originally reported by The Big Spur.  Then, according to our friend Adam over at Life of a Gamecock, Carey Rich of 560 The Team said Gill requested his release after inquiries from ACC schools (plural).  More on that in a minute.

Around the same time, David Cloninger filed a report on Gamecock Central with direct quotes (good for him) from Harris and Gill saying indeed they had NOT requested releases and were still in the process of making decisions about their respective futures.  Apparently neither has spoken to new Gamecock coach Frank Martin aside from possibly a team meeting.

So, what to make of all this?  Well, as the old adage goes, where there is smoke there is fire (unless, of course, you’re Auburn and/or Cam Newton).  I believe Harris and Gill were probably soured by their experience in Columbia this past season, and even the prospect of getting top-flight coaching going forward may not be enough to keep them around.

The good news is reports of their departures seem very premature, and Coach Martin will have the chance to basically “recruit” them back into the program.  Let’s hope he’s successful.

People are strange. I texted the Harris and Gill news to fellow TRCers Tbone and Gman yesterday, and got a surprising response from both.  The response from the normally rabid doom-and-gloomers?  “So what.”

So what?  I know we sucked this past season, and there are a few players who if they requested their release, or were “encouraged” to find another program, I wouldn’t have so much of a problem.

But Harris is a difference-maker in the middle.  His offensive skill set needs work, but he made the SEC all-defensive team and was the team’s leading rebounder.  He would leave a big hole in the middle of the USC lineup if he left.

Gill…eh, I don’t know what to make of Anthony.  Every time I watched the Gamecocks play I heard the announcers rave about #13.  How mature he was for a freshman, how smooth his game is, what an outstanding player he’s going to be.  What I saw was a kid who was raw, and at times pretty soft.  He had some bright moments, but more often than not he seem overwhelmed by his surroundings.  I certainly don’t want to lose him, I think he has a lot of potential.  But I can’t say I’m as excited about him as our SEC play-by-play and color guys were.  Nevertheless…

The bottom line is we can’t afford to lose either, much less both.  The recruiting season is all but over, and the pickings that are left are pretty slim.  I’m confident somehow Frank Martin will bring in a couple of quality players, but the first two quality players he needs to concentrate on are already on campus.

Whoa, wait, back it up, you say ACC schools contacted Gill?  How is that even remotely within NCAA rules?  I’m waiting to hear your explanation about how poaching is now legal.  Go…

NEWS FLASH:  South Carolina has problems at quarterback!  Luckily, I have taken my medications and resigned myself to the fact this is simply going to be a perpetual problem as long as Steve Spurrier is head coach at USC.  We finally have a guy we like as a starter (c’mon, we all loved Stephen, but admit it, you didn’t sleep well at night) but apparently none of the backups can hit the broad side of a Cockaboose with a paddle.  Stay healthy Connor.  Stay healthy.

Open auditions Saturday, meet Ray Tanner at the pitcher’s mound.  The USC baseball team is close to putting things together, I can feel it.  With Michael Roth pitching on Fridays, you have to like your chances.  Colby Holmes has given us a solid Sunday starter, and the bats are getting a little better at hitting with RISP.  But Lordy, we have got to fix that Saturday starter thing.  Since Matt Price moved back to solidify the bullpen we have seen two miserable Saturday starts (or Friday as was the case against Florida.)  Forrest Koumas has been a shadow of the gritty freshman we saw last year.  Evan Beal looked extremely promising early in the year, but got smacked around against Vandy.  Beal will get another shot I believe, but if he doesn’t work out how about Adam Westmoreland?

Cash money yo.  We’re a little late on this one, but from the world of Dabo, his incoming nephew-of-a-Hall-of-Famer QB has apparently been dipping into the family coffers.  On March 26 he Tweeted (on Twitter no less) “Got Stack On Top of Stacks! With Clemson Paper Clips! #Swag haha — Chad Kelly (@ChadKelly12)” along with this photo: 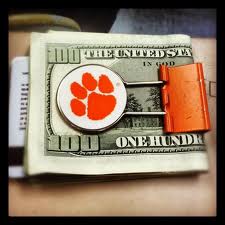 Will they every learn?  Oh, wait, they’re at CTU, so I guess not.  HEY-OHHHHHHHHH!

yay sec yay kentucky way to go.  Ah mush.  While I’m proud to be a member of the greatest conference in the continental United States, my conference affiliation does not obligate me to celebrate a Kentucky national title in basketball.  It just doesn’t, and I won’t do it.  So there.

Mo Claiborne has a “4” attached to his name, and it has nothing to do with his 40 time.  I’m so unaffected by the story that Morris Claiborne scored a four (4) on his Wonderlic test during the NFL Combine, and I’m totally on board with the linked story – I don’t WANT to know Claiborne’s, or anyone’s, score.  It’s an amazingly low score (that I didn’t want to know) for sure, but people need to bag the righteous indignation and pray Mr. Claiborne stays healthy and finds someone to manage his millions well.  His life will center around recognizing formations, running, jumping and tackling well.  He’ll probably make more with one stroke of his pen than I’ll make in a lifetime, and good for him.  How was he able to get admitted to LSU, much less remain there for three years?  Hey, you don’t look behind my curtains and I won’t look behind yours.  (I speak not for the University of South Carolina, my lowlife opinions are mine and mine alone.)

A Hog Crashes a Hog.  Coming up next: Spurrier gets spurred, Miles gets mauled, Saban gets trampled, and Richt becomes a sickly little dog that catches cold from a stiff breeze and dies.  Bulldog indeed.  Child, please.

Tool of the Week.  Congratulations Chris Singleton, the TRC Tool of the Week.  Mr. Singleton bought $10,000 worth of lottery tickets once the Mega Millions pot grew to $656 million.  He said it was “either that or blow it in the club”.

Oh, excuse me Mr. Singleton, when you’re done wiping your ass with hundies, Allen Iverson is on line two.  And the starving children of Africa are on line three.