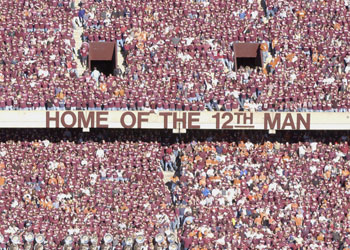 With rumors swirling that Texas A&M will be our new “permanent” Western Division opponent in the expanded SEC, I have seen arguments on both sides as to whether this is a good thing or a bad thing for USC.  Tryptic over at Garnet and Black Attack did an excellent job of skewering our administration for once again kowtowing to the SEC elites, while others have made pretty weak arguments as to why we will benefit from this new arrangement.

If I have one beef with the situation I would have to echo Tryptic’s sentiments – at what point is the USC admin going to stand up and at the very least make someone compromise, much less give in?  It seems like we’ve taken a “thank you sir may I have another” mentality when it comes to any type of negotiations within the conference.

Other than that, my reaction to playing Texas A&M on a yearly basis?  A hearty “meh”.

My image of Texas A&M is that they have a rabid fanbase, very good traditions, but have always played fourth fiddle to Texas, Texas, and oh yeah, Texas.  Which, quite frankly, appears to be why A&M has decided to forge their own path in the best football conference in the nation.

I would like to take just a second to address one pro and one con that I think have built momentum that people aren’t really thinking through:

PRO – This will open up East Texas as a recruiting area for us.  Right, much like our membership in the SEC has opened up the states of Arkansas, Tennessee, Mississippi and Kentucky for us.  I know Texas is a proverbial hotbed of high school football with all their Friday Night Lights and blah blah blah, but if you think we’re all of a sudden going to start roping in three and four star talent from the Lone Star State you need to think again.  There are something like 1000 FBS and FCS schools in the state of Texas, and they’re bordered by Arkansas and Oklahoma to boot. There are way too many schools nearby that mama can drive to and see her baby play every weekend. I’m not saying we won’t get a guy here and there, but a biennial trip to College Station is not going to change where (SC, NC, GA, FL and somehow NJ) and the way we recruit.

CON – It’s so far away.  News flash, so is Arkansas.  So are Mississippi State and Ole Miss.  And Vandy for that matter.  People who went to Fayetteville are probably going to go to College Station.  People who fly are going to fly and people who drive are going to drive.  USC alumni in Arkansas will be replaced by USC alumni in Texas.  What is going to happen is we’ll have between 7500 and 10,000 fans in College Station every two years, which I would guess is about the same number we have at every road game other than Georgia and Clemson.  The two schools are ridiculously far away from each other, that’s a fact, but I’d be shocked if it affects visiting attendance numbers.

Dance like no one is watching. CTU defeated USC in baseball on Sunday to avoid a three-game sweep, setting off a wild celebration at Doug Kingsmore stadium.  Now, we admittedly poked a little fun at our upstate brethren for how over-the-top the celebration was, but upon deeper reflection we admit we really can’t blame them.

First, a walk-off win in baseball is always cause for joy that may go beyond the bounds of the accomplishment.  Second, the Tigers did defeat a highly ranked, two-time defending National Champion. Even though they lost the first two games of the series, they beat what is currently the premiere program in the country. And most of all, the pressure of not only getting dominated in baseball, but in football and basketball as well, has been weighing heavily on the CTU fanbase for quite some time now. That explosion of joy at the end of the game was well-earned and totally understandable.

So, when you see a CTU fan don’t make fun of them for their championship-like celebration, just pat them of the head and softly say, “Good for you Sparky, good…for…you.”

Hornwatch 2012. Since the last time I questioned the fitness of Darrin Horn to be our basketball coach, not only have things not gotten better, they’ve actually gotten worse. So it makes perfect sense that he was basically given a vote of confidence by the Board of Trustees and Eric Hyman last week.

One thought on “The Buck Sweep – Aggieland Edition”