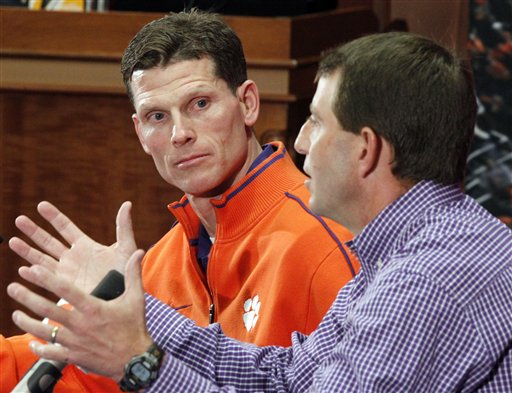 Oh holy crap what have I done.  How did I wind up here?  I was at Oklahoma…home of Wilkinson and Switzer and Sims and Holieway…home of seven National Championships and five Heisman Trophy winners.  Tradition.  REAL tradition.  Not clinging like grim death to some title that was bought thirty years ago…OK, so Switzer bought a couple, but still…  Aw geez, look at this guy, he’s my boss.  MY BOSS.  Bob Stoops WAS my boss, National Championship winner himself.  Protege of Steve Spurrier.  Sure, I was being semi-demoted because he brought his cro-magnon brother back, but so what?  That was a sweet gig.  Defensive coordinator for the Oklahoma Sooners football team.  I was a rising star.  Soon to be head head coach of a major program.  Now look at me.  Wearing a stupid orange and purple jacket and reporting to a real, live, honest to goodness clown.  I know that’s an overused term, but crap man, give this guy a red nose, floppy shoes, a 1969 VW bug and ten more like him and you’re charging $35 a ticket under a big striped tent.  God, those videos of him screaming and dancing and posturing, what a freakin’ phony.  How am I going to endure this?  OK, gotta calm down, hang in there Ven-man, stay the course.  Maybe we tank next year and I can slide into this guy’s job.  I mean, it’s the ACC, and it’s Clemson, but a head coaching job is a head coaching job, right?  A stepping stone.  Yeah, that’s how I have to approach it.  A fresh start.  Ugh, look at him.  Is that a booger?  Gross.  I’ve been here three days and I can’t stand to be in his presence.  I want to punch him in the face.  Geez I think I’m gonna vomit.  Seriously, how did I wind up here?