(Editors Note: This blog post was written and scheduled to publish prior to the Dabo Swinney rant from yesterday. While this particular post is indeed timely, we will have more to say about the subject in the coming days.)

We get it every time we beat CTU,  the predictable “Overall Record Defense.”  I’m sure you’ve heard it multiple times:  “Sure, you guys might have won this one, but so what.   We still have a commanding [fill in series record]  lead in the overall series.”  The intent, of course, is to deflect attention from the fact that we won THIS YEAR and have bragging rights THIS YEAR.  A good friend of  TRC, let’s call him Moon Pie, was recently engaged in a spirited dialogue with a CTU supporter about the butt stomping administered last Saturday.  Said CTU supporter immediately dragged out the tired Overall Record Defense.  What follows is Moon Pie’s retort.  We are publishing  it here to expose this defense for what it is-more CTU delusionary garbage:

After South Carolina’s 34-13 win over the Clemson Tigers last Saturday, the typical rivalry banter has been rampant. Truth be told, the Tigers made it pretty easy for the Gamecocks to talk smack. Between the “Shock the World Tour”, the head cheerleader’s rants on ESPN, Gatorade baths after taking down a 2-10 team, and even @Tahj10 taunting in the Twittersphere, the Tigers set themselves up for a tremendous fall. When they dropped 3 of their last 4, the Meltdown in Tatertown was in full gear.

In typical CTU fashion and with little else to brag about, a familiar mantra has been heard and it’s this last line of defense we’ll explore here. Unless you’ve been under a rock, I’m sure you’ve heard some young punk with no perspective of history throw out “We own the overall series record.” Don’t blame him, it’s what he’s been taught by the cheaters to the west.

Since 1896, the Tigers are 65-40-4 against the Gamecocks, but let’s get real honest about a few things and speak the truth. For starters, a whole big chunk of that 25-win advantage occurred so early in the rivalry it’s almost shameful for them to brag. I mean, it’s like Spain bragging about the Armada. I simply don’t believe you can compare a “win” before the forward pass and facemasks were invented to a win seen nationally on ESPN. And another big chunk of those wins came during a dark time in the rivalry when Clemson was cheating so hard NCAA investigators rented homes in Easley. Clemson supporters got so bent out of shape after a blowout loss in Columbia they hit the road with a sack of money.  Charley Pell and Danny ended up looking like Johnny Appleseed with $100 bills.

Like all of the farm and tractor schools a century ago, Clemson put a huge priority on athletics. USC did not. The student body of South Carolina was mostly sons of the wealthy who were at the college to learn. Sports were intramurals. In 1894, Clemson’s farm boys joined an athletics conference. South Carolina didn’t do that until 21 years later. Heck, in 1906 the Gamecocks didn’t even field a team. It just didn’t matter to them back then. At Clemson, John Heisman was the coach. Their biggest rival was Georgia Tech. Touchdowns were worth the same number of points as field goals. It was not the same game. For Clemson to brag about wins in this era would be like the Green Bay Packers celebrating wins over the Governor’s School for the Arts. I don’t understand how Carolina won the games they did! It really didn’t get competitive until 1922 when South Carolina joined Clemson in the newly formed Southern Conference.

Clemson joined the Southern Conference in 1921 and Carolina a year later. They played in the league together until 1952. Similar opponents, similar teams. Clemson won two conference championships, USC did not. When both teams left the SoCon for the ACC, their head-to-head record was Clemson 16 –USC  13. They tied twice. It’s pertinent to mention here that the Heisman trophy was originated in this era, and leather helmets went away, too (in 1949).

Both teams were members of the ACC from 1953 to 1970. Clemson had a better program under Frank Howard. They won 6 ACC titles to Carolina’s 1. The teams played 18 times as ACC opponents. Each won 9. Clemson won the next two, then the ‘Cocks in ‘73 and right back to Clemson in ‘74, and that brought us to a Gamecock win in 1975 – The Year the Whole Thing Changed.

The 1975 Gamecocks behind QB Jeff Grantz scored 8 touchdowns in 8 possessions in a lopsided 56-20 win. The last TD was a pass with about a minute left. Clemson was mad and vowed:  “This will never happen again.” Their solution?  They amassed the best talent money could buy, and did it very well. Under Coaches Charley Pell and Danny Ford, Clemson won 4 of the next 5 before going undefeated in 1981, beating Nebraska in the Orange Bowl, and buying a National Championship. The NCAA came snooping. No matter – they used their newly-minted national prominence to attract some great talent. They paid these guys so much they didn’t mind being on probation when the NCAA slapped Clemson with the worst penalties ever handed down by the infractions committee (prior to the SMU Death Penalty). And just when you thought they were done, they got caught again. Danny Ford couldn’t survive this time and he was forced out after 11 years. But he left one heck of a legacy – 11 wins in 15 tries over USC, A National Title, and a new name for the booster club: IPTAY —  It’s Probation Time Again, Y’all. Clemson spent more years on probation in the 80’s than Michael Jackson had hit records. 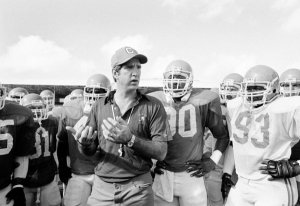 There is no way to quantify the unfair advantage Clemson gained in the overall series by cheating. There’s no doubt the games during these 15 years were tainted, but just how far can you carry the taint? In the 50 years prior to selling their soul for a handful of wins, Clemson held just a 4-game edge in the series. After abandoning morals, legalities, and decency, they won 24 of the next 37. Both schools had very bad coaching hires (Sparky Woods, Brad Scott, Tommy West) and Clemson was simply better in the ‘90s. After suffering through some very bad teams and 8 years in the SEC with inferior talent and coaching, the Gamecocks finally hired Lou Holtz and then Steve Spurrier and now have some SEC-caliber talent. The last three years have proved it.

The next time they start spouting off about the series record, ask if they know what happened in 1975. Remind them of Jeff Grantz and Charley Pell. Acknowledge they’ve won more conference titles, and congratulate them for that. Ask  if they had electricity on the farms when they scored about 20 of those wins. Then ask  if they are proud to tout Danny Ford’s record. When they wear that solid orange, does it make them feel like an inmate from the Pickens County Jail? Yes, you’ve got the overall record to hang your hat on, but is it worth your dignity? Are you proud your school built their program by severely cheating? Go ahead and crow about 65-40. Enjoy the Hokies on Saturday. Reflect on nearly 1100 days since you beat the Gamecocks. Jump up and down with your cheerleader coach. We’ll see you next year.  Oh, and get ready for 65-41 (that’s FOUR IN A ROW).

View all posts by gman