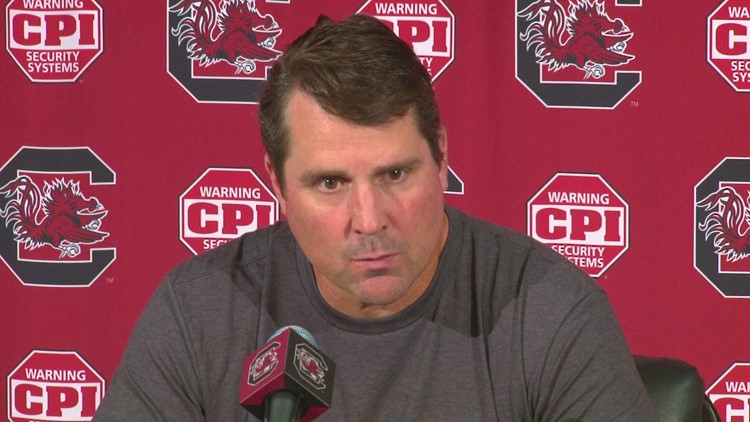 Me to Will Muschamp: "How have you addressed voting with your team?"
Muschamp: No response
Me: "You know there's an election today?"
Muschamp: "I do now. I'm getting ready for Florida."

2. Josh Kendall’s question was an innocuous attempt to get a quick soundbite about an important day in our country. He had no agenda. He wasn’t somehow baiting Will Muschamp. It was a softball. Josh Kendall is not an undercover agent for the University of Georgia and he is not at fault here.

3.  Despite his answer, Muschamp did actually know yesterday was Election Day.

By the way, this is Steven Montac's response on if Will Muschamp talked to his team about voting. pic.twitter.com/7YIPqUz4nS

4. I don’t know why Will Muschamp answered the way he did, but I almost immediately recognized he was being facetious. Maybe he was trying to make the point that he was solely focused on the Florida game. Maybe he was trolling Kendall. Maybe he was simply being a smartass. Maybe he was honoring his former boss.

Nick Saban, the day after the 2016 Election pic.twitter.com/P9dLd4TrfI

5. Muschamp’s answer does not mean he does not care about his players. As a matter of fact there is a lot of evidence that he cares a great deal about his former and current players, and they feel the same way about him. He has actually put measures in place, including the hiring of Marcus Lattimore as Director of Player Development, to help players deal with life away from the game.

6. Muschamp’s answer is not indicative of some great systemic failure by Muschamp, the University of South Carolina, the Southeastern Conference, college football, or college sports in general to mentor and care for our kids.

7. Muschamp could’ve given an answer that was more pleasing to some folks and this whole episode could’ve been avoided. Or people could’ve taken his actual answer for what it was worth – about one grain of salt.

8. Will Muschamp is a meathead. I say that as a term of endearment. He’s a football lifer, a guy who played like a maniac and many times coaches in the same manner. He has gifs and memes making fun of his intensity. Some folks in the public eye are playing off this to make him look like a guy who chews up and spits out players and only cares about what they can do for him on the field. This couldn’t be further from the truth.

9. Despite an insane series of tweets from Bucky Brooks, Will Muschamp is not a racist and trying to discourage minorities from voting.

It’s not a coincidence that some folks from the Deep South are ok with young people, particularly Black athletes, not being educated on the electoral process.. https://t.co/xbsHK01P63

10. Shut up. Everybody. Please. Including me.

Published by The Rubber Chickens