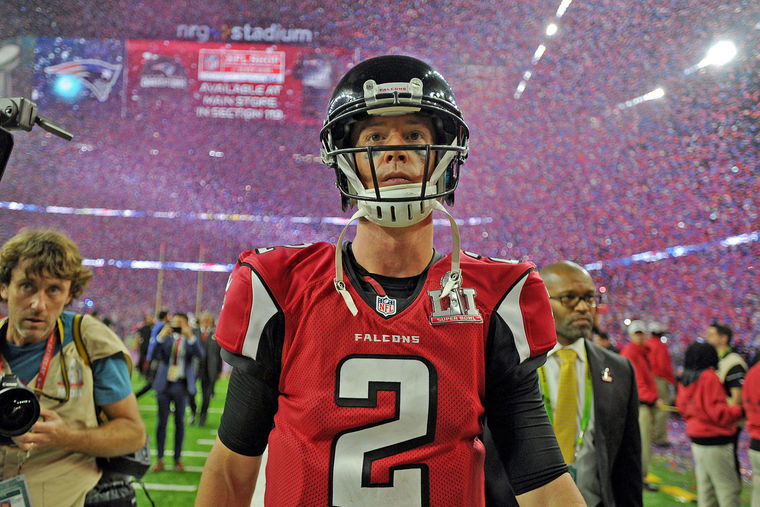 “Consider it all joy, my brethren, when you encounter various trials, knowing that the testing of your faith produces endurance. And let endurance have its perfect result, so that you may be perfect and complete, lacking in nothing.” – James 1:2-4, The Holy Bible (NASB)

I stood in one spot, arms crossed, practically motionless for roughly 45 minutes. It seemed like a lot longer. Hell, maybe it was, time was irrelevant to me at that point. All I knew the entire time was that I was watching, in relative terms, perhaps the greatest collapse in American sports history.

Slowly, painfully, it unfolded in front of my eyes. I told all the casual fans I was with “it’s over” at least five times over that last 45 minutes. After all, I’m a fan of all the Atlanta franchises, and I’m a fan of the South Carolina Gamecocks. This was old hat to me. I knew the ending long before anyone else.

I watched the confetti fall and saw Belichick hug Brady and that was all I could take. I thanked my hosts for a wonderful evening, got in my truck, and on the way home listened to the Falcons’ incomparable play-by-play man Wes Durham try to make sense of it all. He sounded as if he was describing the aftermath of a natural disaster.

I tried to sleep, but I kept replaying in my mind all the plays the Falcons could have made that would have changed the outcome. Each one felt like someone was punching me. It was almost physically painful. Then at some point I thought – is this the worst? Is this the worst ever? Because it feels like the worst ever. In a sporting life with the disappointments outnumbering the major accomplishments by a ratio of roughly 100 to 1, this really felt like the worst. So as I drove in on Monday morning, I tortured myself by trying to recall something worse, and it simply never arrived.

But it did spur (pun intended) this writing. For fans like me of the Atlanta franchises and the Gamecocks, this will be all too familiar. As fans of other teams you probably don’t give a crap, but hang in there and read along, for this is where my healing begins.

A couple of quick notes here. First, the 1984 Navy game is not included because I didn’t become a Gamecock fan until 1987. There are also a couple of surprises that don’t involve Atlanta or South Carolina. Don’t judge.

So, without further adieu, here are my top 10 sports defeats of all time:

Maybe in time this one will fall down the list, but I at the moment I really don’t see how. You know what happened, I don’t need to rehash it. The only thing I’ll say is RUN THE DAMN BALL SHANAHAN!

The Gamecock basketball team had a magical run in 1996-97, led by the big three of BJ McKie, Melvin Watson and Larry Davis. They blitzed through the SEC slate and won their first and only conference championship, culminated by a stunning upset of Kentucky in Lexington on their senior day. But there was one thing I couldn’t shake heading into the NCAA tournament – how in the world did this team lose to UNC Asheville and Charleston Southern early in the season? That bothered me as a number two seed, that we could possibly play down to the level of our competition in the opening game. Well, Coppin State played out of their minds, and cemented our unfortunate place in the history books.

One year earlier, as Marquis Grissom squeezed the final out of the 1995 World Series, Bob Costas declared the Atlanta Braves the “team of the 90s”. They appeared to be on the verge of solidifying their grip on that moniker, with a 6-3 lead in the 8th inning of a game that could’ve given them a commanding 3-1 lead in the 1996 Series. Alas, Mark Wohlers hung a curve ball to Jim Leyritz, who tied the game with a 3-run homer. New York would go on to win that game in extra innings, and the series four games to two. The Yankees then went on to become the ACTUAL team of the 90s, while the Braves went on an unprecedented run of postseason futility . Until Sunday, that game was the most infamous in Atlanta sports history.

If Coppin State worried me, Richmond terrified me. The Spiders were an NCAA Tournament regular, pulling off the first 15-seed vs. 2-seed upset in the history of the tourney. Unfortunately this Gamecock squad wasn’t quite as good at the ’97 version and once again bowed out in humiliation.

The Falcons blew an early 17-o lead and a 24-10 halftime lead, a trend unique to Atlanta. The good news here was I was in the hospital with my newborn daughter, so I watched the game on a tiny hospital TV and was otherwise preoccupied. Still, pretty damn painful.

For those of you who pulled for Clemson in 2016 and/or 2017 I will never understand you. Clemson winning a national title in anything, much less football, is never a good thing for us. Now we have to deal with merchandise, license plates, billboards, etc., until we can do something about it. Which might take a while.

I really didn’t expect the Falcons to make the list three times when I first started thinking about this, but here we are. I was only 11 at the time, and don’t remember much about it except that I was extremely bummed. This game once again featured the Falcons building a big lead and collapsing at the end. Sound familiar?

I know this surprises and possibly upsets some of you, but again I remind you I was not a Gamecock fan until 1987. Prior to that, North Carolina basketball was truly my first love. The UNC-Marquette game was the second sporting event I can ever recall watching (the first was Super Bowl XI between the Vikings and Raiders). I loved Dean Smith, I loved the Carolina blue and I decided that night the Tar Heels were my team. Of course they lost.

In ’81 the game between Indiana and UNC was almost postponed because President Reagan had been shot earlier in the afternoon. I remember thinking “looks like he’s going to live, let’s play ball!” (Hey, give me a break, I was a kid.) I got so frustrated with the game I would turn the TV off for 10 minutes at a time hoping that when I turned it back on the Tar Heels would have closed the gap. They never did, and I cried myself to sleep.

North Carolina would break through for their first, and my first, national title in 1982 behind the brilliance of Jordan, Worthy and Perkins. Of course I can’t claim that any longer because I now despise the Tar Heels with every fiber of my being. Was fun at the time, though.

Please, make me feel better and share your toughest defeats in the comments section.

5 thoughts on “Loving and Losing: My 10 Greatest Sports Defeats”