Here are a few nuggets after watching copious amounts of football over the last four days. Keep in mind, one game is the smallest possible sample size you can have for every team, so I reserve the right to change my mind over the course of the season. I will also humbly admit where I was wrong as the season progresses (ha, fat chance).

Bama is still the king. The first weekend of the college football season is the absolute worst predictor of how a team will be long-term. Teams are still working out their depth chart, coaches are getting a feel for new players, many times new systems are being implemented. Even veteran squads like the Clemson offense are not immune to first game struggles. First games are scary.

But this Alabama team looked like a well-oiled machine against Southern Cal on Saturday. They were predictably dominant on the line of scrimmage and their defense was what you would expect of a ‘Bama defense. However, the addition of Jalen Hurts gives the Tide a weapon the likes of which they haven’t had in a long time, and maybe ever. If Alabama can win a National Title with a cigar store Indian like Jake Coker at the helm, then Hurts might make them one of the dominant teams of this decade. Everyone else could be playing for second place.

Houston is legit. One of the contenders is definitely going to be Houston. As bad as I hate to admit it, Tom Herman is going to have this team in the college football playoff come season’s end. They are far and away the most talented G5 team ever, and the way they manhandled Oklahoma has everyone taking notice. They only have one real test on their schedule the rest of the way – Louisville on November 11. If they can keep from stumbling they’ll finish top 4.

Nick Chubb is the leader in the Heisman Trophy race after week 1. He had 222 yards and two touchdowns on 32 carries against North Carolina. That’s a fantastic stat line for somebody who didn’t have their knee gruesomely shredded 11 months ago. But having numbers like that after the injury he suffered is almost not human. Chubb is cut from a different cloth, and I will not be the least bit surprised if  he’s hoisting the Heisman in December.

Gus Malzahn has forgotten how to coach. You sometimes hear people say “well it’s not like he forgot how to coach” when responding to criticism of a team’s head man. But with Malzahn you have to wonder. Three years ago he was the toast of college football with his innovative hurry up no huddle offense. But last night against Clemson he not only rotated three quarterbacks (bad idea) but he rotated them within series and sometimes within sets of downs (worse idea). His entire offensive philosophy has made no sense for the last season + one game. A lot of it has to do with the fact he doesn’t have a quarterback he trusts, but at some point he has to ride or die with one person.

Dan Mullen missed his window. Mullen has taken Mississippi State to its greatest heights as a program. He was a hot coaching candidate for several years, and was mentioned in connection with multiple jobs better than MSU (sorry Bulldogs). Whether he didn’t want those jobs or was never considered, he now looks like he’ll be at State for a while trying to rebuild that program. I don’t think any big programs are going to be knocking down his door for his services.

LSU should’ve fired Les Miles. LSU was shamed into keeping Les Miles last winter. Miles had so much public sentiment on his side he didn’t have to make any significant changes to his staff, and that’s a shame because Cam Cameron is bringing LSU down from the inside. Miles has had a great run at Baton Rouge, but they have underperformed and underachieved long enough now that they are going to have to make a change. 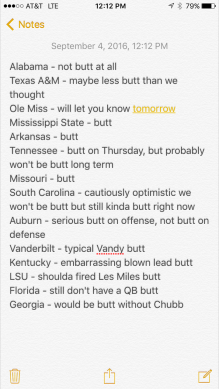 he SEC is mostly mediocre. Outside of Alabama, are you confident there is a top 10 team in the SEC? I think this season could see all of the middle-of-the-packers beating up on each other and you’ll have a slew of teams between 6-6 and 8-4. Does this  mean the SEC is down? Compared to 3-4 years ago, it sure does.

(To  the left is our “Is the SEC butt?” ratings after one week.)

The ACC is a 3-team race. Most think it is a two-team race between Clemson and Florida State. But Louisville is primed for a run at the title under Bobby Petrino. The talent there is better than it has ever been, and Lamar Jackson is the closest thing to Michael Vick we have seen since Michael Vick.

Two and three-quarterback systems will be a short-lived fad. I’ve seen more quarterbacks used in this first week than at any time I can ever remember. I think over the long haul that’s a very bad idea, and I expect by week three or four you’ll see the majority of teams settle on one QB except for possible short-yardage packages.

Texas is back? As I’m typing this Texas is down to Notre Dame 35-31 in the fourth quarter. But the Longhorn offense has looked excellent under freshman QB Shane Buechele. This makes me happy for Charlie Strong, who is a solid dude and a good coach.

3 thoughts on “Things I Learned Over the Weekend”