Some quick, barely researched, not fully-formed thoughts from South Carolina’s 45-24 loss to LSU:

Our Fall of Discontent. After one of the most disastrous weeks in the history of our beautiful state, the South Carolina’s relocated game against LSU was an opportunity for an ever-so-brief healing moment in the midst of tragedy. If only our beloved football team could give the 7th-ranked Tigers a fight, and maybe even pull off an upset, we could take a moment to smile and give a high five or two. Unfortunately, the 2015 Gamecock football season continued to play out in the worst possible fashion in Baton Rouge.

For the first half the Gamecocks played well, but not particularly inspired. They went into halftime down 17-10 in a  game that had a weird vibe from the very beginning. Then the Tigers woke up. Heisman candidate Leonard Fournette ripped off an 87-yard touchdown run on the second play of the second half, and the game for all intents and purposes was over. In a game where we were hoping for an inspired performance, and perhaps even a (gasp) moral victory to give us some glimmer of hope for the remainder of the season, LSU gashed USC with long run after long run to hand the Gamecocks another embarrassing loss in a year that is sure to be full of them.

Our severely depleted offense did all they could, but in addition to Fournette’s big day, the defense gave up career highs to backup running back Derrius Guice (16-161) and career highs in completions (18), attempts (28), and yardage (228) for quarterback Brandon Harris. LSU rolled up a humbling 624 yards of total offense against our million dollar coordinators.

As was noted on Twitter, this game felt a lot like a Gamecock football game from the ’90s – completely outmanned, able to hang for a while, but ultimately obliterated by the other team’s obviously superior talent.

How in the world did we get here.

The HBC. Well, we can start with this guy I guess. I’m not sure there’s anything else we can say on this blog about Steve Spurrier’s future that won’t sound like dead horse flogging. But, as if we needed more evidence that the HBC is going to be done after this year, we got this gem:

To be clear, Spurrier said Wilds and Heard were cleared to play by doctors and trainers and chose not to play.

With all due respect to Carlton Heard, him not wanting to play even though he was cleared it not a big deal. But Brandon Wilds is a different story – a senior and a guy we praised earlier this year for calling out the coaching staff for not giving him the ball enough against Kentucky. Wilds quit on Steve Spurrier, and quit on us, yesterday. I don’t type that lightly. I don’t know how badly Wilds was/is hurt, and I don’t know what was said to other coaches are trainers. All I know is Spurrier was frustrated that one of his main guys was cleared to play and decided he didn’t want to.

Oh, but it doesn’t stop there, a guy who has taken about five snaps this year decided to chime in as well (since deleted): 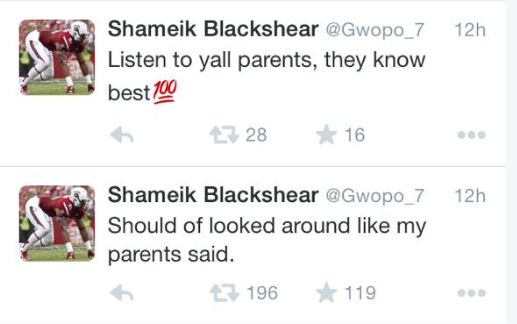 This devolved into a short back and forth between Shameik Blackshear and Cory Helms, but that’s beside the point. The point is Steve Spurrier has lost the locker room. He had some lame comment that “ah this type of stuff happens when you lose”, and no, it does not. Respected leaders can lead a losing locker room just as well as a winning locker room and prevent nonsense like this.

Steve Spurrier no longer has that respect.

One step HokeWard, ten steps back. After 2014 there was a great cry for Spurrier to make a change at defensive coordinator. Instead, he waffled, deflected, and finally sort of demoted Lorenzo Ward and brought on old buddy Jon Hoke to take over. The results? See for yourself with where South Carolina stands in these up-to-date SEC rankings:

Pair these with the offensive statistics (we’re currently 13th in total offense) and congratulations we have the worst team in the SEC. Some people blame talent, some blame coaching. I think you have to blame it all.

Have I mentioned we finished #4 in the country a mere season and a half ago?

Fenton-ease. Our biggest bright spot yesterday was Rashad Fenton, who broke a dubious 13-year streak by returning a kickoff for touchdown. Ghosts of Matthew Thomas, be exorcised!

Leonard Fournette and LSU. What a touching move by Fournette yesterday to offer to auction off his jersey and give the proceeds to flood relief in South Carolina. After all, if anyone knows what the people of our state are going through right now it is him. As a 10-year-old, during Hurricane Katrina, Fournette lived on an overpass for five days and four nights in a harrowing experience. Thank you Leonard, go win the Heisman, you have the entire state of South Carolina pulling for you.

Also, thank you to the great people of Louisiana State University. Your hospitality will not be soon forgotten.