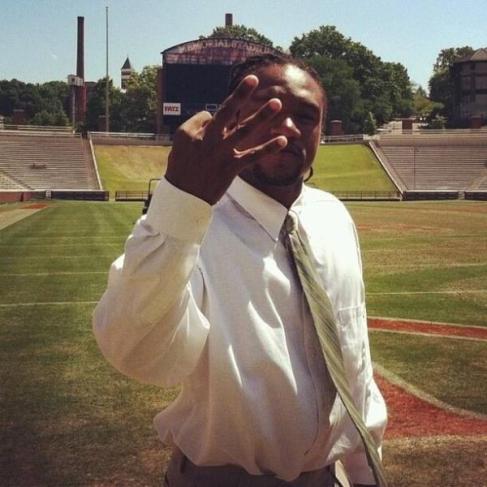 Kenny Miles created a significant stir among the Cheetos finger-stained, bonus-room dwelling, 7th-year junior, CTU fan set this week when he posted the above photo on his twitter feed.  The picture, which purports to show the Gamecock running back inside of the Copycat Imitation Death Valley (as most know, the real one is in Baton Rouge, the real REAL one is in California) flashing three fingers in an apparent reference to the three consecutive victories South Carolina now enjoys over the hapless Tigers.

As we have often mentioned in this space, the acrimony between the fanbases of our State Flagship University and its junior neighbor is often overblown and based on senseless misunderstandings.  We have, as always, determined that the best path forward is to patiently explain occurrences such as these to our CTU annoying unemployed brother-in-laws in hopes of diffusing the situation.  We also find that such discussions are best conducted in simple sentences and with the aid of primary-colored visual aids, but I digress . . .

Our point is this:  Calm down, Tigers.  We realize that your steady diet of Mountain Dew and pork rinds has you a little wired at present, and the fact that your university is apparently no longer able to defeat the State Flagship School in ANY SPORT WHATSOEVER may be exacerbating your condition.  Regardless, we would like to offer some further commentary on the photo that might serve to place it in proper context.  And if in doing so we bring a little peace between the school in the premier collegiate athletic conference and the school that’s – ahem – NOT in a premier collegiate athletic conference, then all the better.

So here you are, context and explanation of the Kenny Miles, Faux Death Valley, three finger salute:

–  He’s not actually making a reference to the three consecutive football wins.  Instead, Miles is flashing his jersey number, but wise discretion prohibited the photographer from showing the other hand and #31’s method of conveying the other digit.

– The three fingers could also represent the number of Clemson locals that said “Hey buddy, that green thing hangin off your collar is the smallest bib I’ve ever seen!”

– The photo is not actually taken in Clemson, SC.  Since the Gamecocks now completely own the Tigers, this stadium is kept inside the weight room in Williams Brice Stadium.

– Speaking of weight rooms, here’s a little known fact:   Tiger Strength and Conditioning Coach Joey Batson thinks “weight rooms” are the little places with plastic chairs where he lingers before seeing his chiropractor.

– If you look closely, you can see that the photo was taken just prior to the last Tiger home football game.  CTU Sports Information Director Tim Bourret reported attendance as “83,001.”

– Miles is a secret Mountineer fan, and went to the stadium because he heard the best place to find West Virginia players was in the Clemson endzone.

– You see Tillman Hall in the background?  It was named after former Senator “Pitchfork” Ben Tillman.  If you get a minute, Google ‘Pitchfork Ben Tillman’ and then tell why they would name a building after that clown.  Yeah, I don’t get it, either.

– For reasons that underscore the inadequacies of Clemson men, all Clemson women cry bitterly when they see that large towering cylindrical structure in the middle of campus.

– You see the scoreboard ad for Fatz?  That’s not a reference to the local restaurant chain, instead its referring to Assistant AD, Brad Scott.  And yes, that’s how they think it’s spelled.

– Miles IS holding up his fingers to represent the number three, but only as he delivered the punchline to the following joke:

You know how to make Clemson Cookies?  Easy, just put some dough in an orange bowl and beat it for this many hours.”

– OR, Miles is holding up the three fingers because that was CTU Honor Graduate C.J. Spiller’s Wonderlic score.

– OR, Miles is holding up the three fingers because that’s how many years Dabo Sweeney slept in his mom’s bed during college.  Really sweet story, btw.

There you go, Fanboys.  Hope this helps.