In case you haven’t heard, the Gamecocks will be rocking an alternate uniform for the Auburn game.  The unis are being worn  in support of the Wounded Warrior Project, an important charity if ever there was one, and are completely badass: 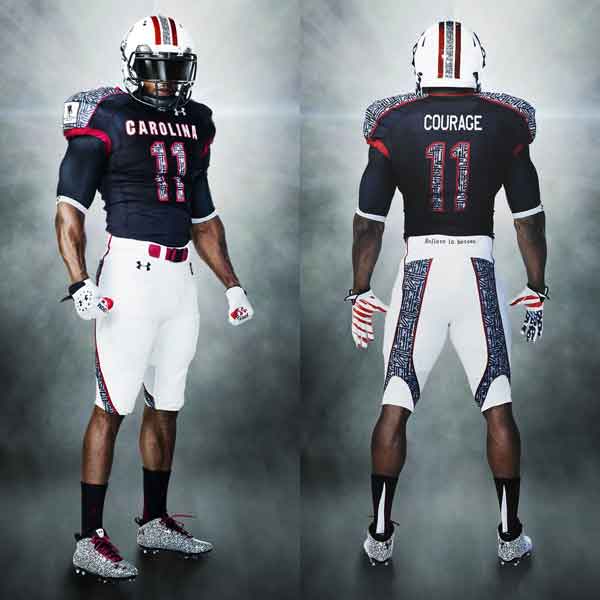 Yes, I agree:  Auburn will take one look and run back into the locker room.  /bows head, /offers silent, earnest prayer

Regardless, our nonexistent sources within the football program tell us that other, more esoteric, uniform options were considered before UA and the AD settled on the Wounded Warriors.  As a benefit to you, our loyal readers, we share ten of the other potential Gamecock Unis, with pros and cons for each:

PRO:  Doubles down on the “warrior” motif.

PRO:  Would add a physical element to Jay Wooten’s game

CON: Post-game shower confusion:  This is exactly  what Jadeveon Clowney looks like naked. 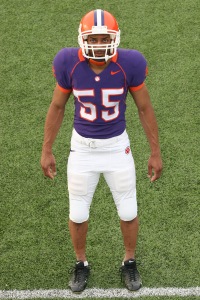 PRO: There is no Pro.

CON: Looks like Halloween got sick and vomited on a high school player

PRO: THERE IS NO PRO!

CON: Not the exact shade of Garnet we wear, I know.

PRO: Might (I said MIGHT) improve quarterback efficiency (we are willing to try anything at this point).

CON: Also gives would-be tacklers something to aim at.

PRO:  Would annoy our Mercantile Overlords at Walmart

CON:  We all work for the Mercantile Overlords at Walmart now, or at least need fishing tackle.

PRO: Comes in green, red, black, and white – all with unique abilities built in.

I JUST POSTED A PICTURE OF KATE WINSLET AND YOU ARE STILL THINKING ABOUT FOOTBALL UNIFORMS????

[This is intended as a palette cleanser after the Winslet pic]

PRO: Endorsed by both the Vatican and the Crash Test Dummy Association (this is a comment on DESIGN, not on religion, geeze)

CON: No reasonable individual would wear or suggest that someone else wear this monstrosity – WHAT? someone did and a bunch of other people went along with it????

CON: For some reason, no one is allowed to wear this one. 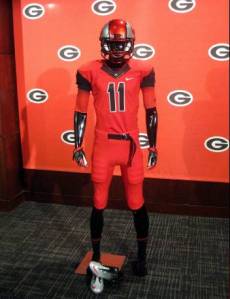 PRO:  Reminds us all of the lesser known Arena League warriors that toil away in obscurity.

CON:  May get tangled during Buck Sweep exchange.

In the end, I think the AD made a good choice.