Ever since it came across my Twitter feed last evening that Connor Shaw is getting the start over Stephen Garcia Saturday night, I’ve been slightly less excited and optimistic about our football season (by slightly, I mean on a scale of 1,000,000 I’m down to about a 999,500).

On the eve of what is supposed to be the greatest college football season in the history of South Carolina football, and at the most important position on the field, Steve Spurrier is giving Shaw his first career start over Garcia, who is the third leading passer in school history and has started 28 consecutive games.

COACH SPURRIER, STOP SCREWING WITH US!!!!!

There was speculation all over Twitter last night that maybe this is Spurrier’s final jab at Garcia over his “transgressions” (for which he has been forgiven, right?) But Spurrier says no, Shaw has just played better in practice and deserves the start.

Spurrier has talked about a clean slate, fresh start, etc., when it comes to the QB situation. Well, sorry coach, I just can’t erase victories over Georgia, Alabama, Tennessee, Florida and Clemson in the same season from my slate. With all due respect to Connor Shaw (whom I like a lot), Stephen Garcia would take the first snap for me from under center on Saturday night.

The HBC is very calculated in everything he says and does, and more often than not it works out.  My belief is this is most likely a motivational ploy for Garcia, and he’ll get the most playing time Saturday night and will get the start next week against Georgia. 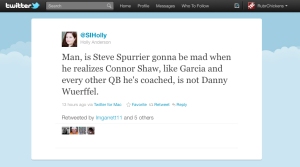