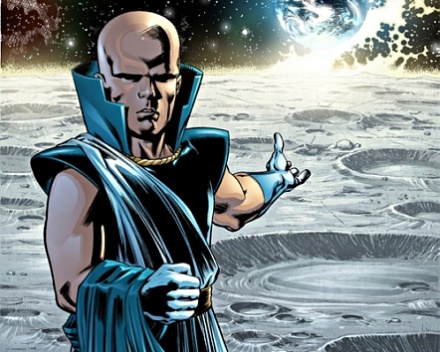 Greetings. I am Uatu, The Watcher. I was assigned to your world by my Brotherhood to observe and record your development as a species. From my abode on the dark side of your earth’s moon, I watch, I catalog, and I report. While your advancement is impressive in many realms, you fail to grasp the basic nature of your own reality. You do not even realize that other realities exist alongside your own.

I, The Watcher, see all of these realities.

Allow me to demonstrate. I will select one of your average younglings and thereby demonstrate this coexistence of space-time alternatives:

Behold one Stephen Gary Garcia, a young man in the beginning of his adulthood. In your space-time, young Stephen is the erstwhile field general for one of your educational sporting teams.

But in other space-times, a younger Stephen decided to lead other groups. Behold these alternate – and equally valid – realities, which I select at random:

Earth Reality #30453: Stephen Garcia is the rising redshirt senior quarterback for the Gators of Florida. His head coach, one Urban Meyer, just signed a ten year extension to his contract. Garcia starts a fashion rage in Gainesville by foregoing the ubiquitous blue jean shorts of his contemporaries and instead dons [gasp] khaki shorts. Meanwhile Gamecock quarterback John Brantley constantly evokes his head coach’s ire by “not getting the ball out of his hands quick enough.”

Earth Reality #46921: Stephen Garcia is the returning starter for the Clemson Tiger University.  Head Coach Dabo (yes, in that reality a grown man can apparently be called “Dabo” as well) Swinney anoints Garcia as the next Joe Montana, and describes Stephen’s leadership, charity, and GPA in effusive – albeit simple – words (Side note, CTU still went 6-7 last year. That happened in every recorded reality save one, Reality #23452, where Georgia Tech runs a modern offense, and Dabo finished 5-7).  (Additional side note, upon exhausting his football eligibility, Garcia is immediately arrested for fifty unpaid parking tickets, three open container violations, two barroom brawls, and one high speed pass over a former coach’s daughter. When asked for a comment, Dabo answers with a perplexed “WHO?”, throws down a cherry bomb, and flees behind a mirrored screen).

Earth Reality #60471: Stephen Garcia is playing for the Cardinals of the University of Louisville. No one cares.

Earth Reality #21091: Stephen Garcia has graduated from the University of Georgia with a degree in Eastern Philosophy. He performs weekly in Athens bars as a beat poet.  He gave up football after his junior year because, as he put it, “those guys are a bunch of thugs.”

Earth Reality #10023: Stephen Garcia quits football after graduation and becomes a motivational speaker. He specializes in calling out individual members of the audience and comparing them unfavorably to the saintly-est of their coworkers. Says he learned the tactic “directly from an NCAA sanctioned program I once attended.”

Earth Reality #41204: As a rising sophomore at Tennessee, Stephen Garcia is expelled for urinating on Head Coach Lane Kiffin. His defense is that, having knocked the coach out with one backhanded slap, the laws of manhood dictate that he mark his kill. Tennessee refuses to reinstate him, but for perpetration of the deed he is awarded the Heisman, the Nobel, and the Congressional Medal of Honor by unanimous public acclimation. (Side note, David Reaves cried during the attack and the award ceremonies.  And later in bed. Again).

Earth Reality #29981: Stephen Garcia was in the room when Auburn gave Cecil Newton a large and apparently heavy canvas sack embroidered with dollars signs. It might surprise you, Earthlings, to learn that almost all possible realities involve Auburn giving Cecil Newton some form of cash or gold. And much to The Watcher’s surprise, none of these realities result in even the slightest of penalties from the NCAA.

Earth Reality #39971: Stephen Garcia quit football after the 2008 Outback Bowl. He moved to Dallas, TX and works in construction management with his brother. After work he occasionally like to toss back a couple of frosty ones with his buddies. JUST LIKE ALL OF THE REST OF YOU.

Lo and Behold, Earthlings!� This small sample should show you the intricacies of the space-time continuum, and underscore the power and vision of The Watcher.

Oh, and before I return to my lunar abode, I leave you with one last word of wisdom, gleaned from my infinite observations:

One thought on “NERD ALERT! In Which We Discuss Alternate Realities”