Last night you sat behind a table deep in the bowels of Williams Brice Stadium and faced the music. Coming off the worst defensive performance of the season, you sat down in front of the microphones and waited for the questions from reporters. I did not envy you, but I watched and listened and hoped for an explanation.

“When did the game turn against South Carolina?” a reporter asked you. You paused, focused, and answered, “Kickoff.” Nervous giggles percolated around the press room, but you were undeterred. You continued on with an assessment that Arkansas was too good for our defense, we couldn’t stop them, and all the coaches knew it.

The words you see here (right here in this sentence) are placed here instead of the twenty other sentences I have written, edited, censured, and rewritten to express to you my complete frustration at your performance and your attitude.

I don’t see what you see in practice. I don’t know a tenth of what you do about football. But it seems to me that defensive football comes down to four things: personnel, fundamentals, scheme, and attitude. I would like for your to consider the possibility that you are failing the team (and its fans) in all of these areas. 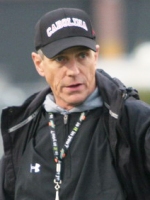 If SC fails to win the East, much of the blame belongs to this man

First, in looking at personnel, I would like for you to think back to last year’s unit. You had a relatively untested sophomore cornerback set to replace Captain Munnerlyn, who moved on to the NFL.  The player was Akeem Auguste, and he impressed you enough in practice to win the starting job by the season opener.  He went on to start at corner for the entire 2009 campaign, racking up 38 tackles, 10 pass breakups, and several tackles for loss. Despite his positive experience, this spring you experimented with Auguste at safety, and moved the starting safety, Chris Culliver over to corner.  Auguste never took to the change. In fact, he’s openly asked for the corner job back.  He has since struggled to stay ahead of D.J. Swearinger on the depth chart, and has look confused and uninspired for most of the 2010 campaign.

Coach, move Auguste back to corner. Pick up the phone and call him right now. Tell him that he will be the starting corner in the Swamp. He will be elated, and will focus this week like never before. I know it will be admitting you were wrong from the very beginning, but when we are down to a walkon at that corner spot due to injuries, it might be time to drop the ego and do what’s best for the team.

Now, as for fundamentals, I think we both know that the 2010 unit has regressed. Despite the fact that all of these starters are returning lettermen, this year we’ve watched them repeatedly take bad angles, drop sure interceptions, and display poor tackling technique.  I would like to suggest that you forgo some of your favorite “good on good” pass skels this week and instead run your stop troops through some introductory drills involving pursuit lines, head positioning, and wrapping up. I know this should be second nature to them now, but for whatever reason, you haven’t taught these guys how to do the basic things the right way yet.

As for scheme, you are the film room junkie, so I’ve gotta trust you on this one.  But I would suggest that the communication of this scheme, the education part of your job, is an integral component. You complained last night that, even on some of the good plays, your pupils were out-of-place.  Well coach, after multiple practices, hours of film, and nine freaking games, if your students don’t understand your lessons, then you may need to try a different teaching method.  How ’bout this: tell them to go play ball.  Tell them to relax, keep their eyes up, and play some man-to-man. I’d rather us lose by getting beat straight up than having our guys staring at each other in confusion and playing tentatively because you’ve got them in some esoteric zone hybrid that they don’t fully understand.  Keep it simple, and maybe we won’t all look so stupid.

Now we come to the one that motivates this entire diatribe.

Coach, your attitude stinks. You said on thursday prior that we couldn’t stop Arkansas and that we could only hope to limit them. I hope you weren’t telling our players that defeatist nonsense.  I hope instead that you were telling them that no quarterback, no matter how frankensteinishly large, is going to shuffle into our stadium and carve us up.  I hope you told them our goal was to shut Arkansas out, to make them wish they’d never got on the plane in the first place. I hope you tried to make them believe in themselves.

Because the bottom line deal on the 2010 pass defense is a lack of confidence.

Whether its from lack of understanding, lack of success, or lack of athleticism, our defensive backfield no longer believes in itself.  It shows in how they yell at each other, it shows in the ginormous cushions they give to the opponent’s wideouts, and it shows in their lack of interceptions. Confused and underconfident kids don’t execute, they don’t capitalize, and they don’t win.

Actually, now that I think about it, your answer was right.  And unless you change some things quickly, I can tell you when next week’s SEC East Championship game will be decided:

It will be over at kickoff.

4 thoughts on “An Open Letter to Ellis Johnson”